Review: ‘Eye in the Sky,’ Drone Precision vs. Human Failings 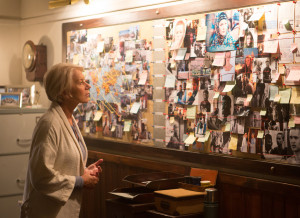 From The New York Times

An alternative title to “Eye in the Sky,” a riveting thriller about drone warfare and its perils, might be “Passing the Buck.” When urgent life-or-death decisions are required in a race against time to kill terrorists preparing a suicide attack, officials, wary of being held responsible for civilian casualties, repeatedly “refer up” to higher authorities for final approval.

That means securing an official go-ahead to deploy a Hellfire missile on a house in a crowded neighborhood in Nairobi, Kenya, where terrorists are meeting. But the British foreign secretary is at an arms trade fair in Singapore and the American secretary of state is attending a table tennis tournament in Beijing. How inconvenient! Meanwhile, the military, champing at the bit to unleash its firepower before the terrorists disperse, are increasingly frustrated.
Helen Mirren, in one of her fiercest screen performances, plays Col. Katherine Powell, the chilly officer in charge of Egret, an operation to capture a radicalized English woman meeting with Shabab terrorists at the house in Nairobi. Colonel Powell has been pursuing her for years. But as the moment of capture arrives, Colonel Powell’s plans abruptly change when a cyborg beetle, a small whirring surveillance device, reveals two inhabitants strapping on explosives for a suicide mission.

The metallic spy, the movie’s creepiest element, reinforces the Orwellian notion that nowadays there are no hiding places if the powers-that-be are out to get you. The characters’ robotic techno argot, intended to convey military expertise while camouflaging human element, is equally Orwellian.

Colonel Powell quickly secures permission from her superior, Lt. Gen. Frank Benson (Alan Rickman), to upgrade the order from “capture” to “kill.” Those orders are relayed to Steve Watts (Aaron Paul), a drone pilot in Las Vegas poised to launch the air-to-surface missile. But unforeseen interruptions keep delaying the attack.

General Benson is Mr. Rickman’s final screen performance, and it is great one, suffused with a dyspeptic world-weary understanding of war and human nature. Because his character is observed early in the movie buying a doll for a child, he is not unsympathetic so much as profoundly sad. Ms. Mirren has rarely been icier, and her powerful, scary performance doesn’t strive to make her character likable.

“Eye in the Sky” covers many of the same issues addressed in “Good Kill,” Andrew Niccol’s underrated critique of American drone strikes in Afghanistan, released last year. At what point does warfare by remote control become an impersonal video game in which the human element is overlooked in the pursuit of a so-called “good kill”? In that movie, Ethan Hawke played a drone operator in Las Vegas increasingly sickened by having to deploy missiles that killed women and children. The movie reserved special contempt for the Central Intelligence Agency, whose attitude toward collateral damage was portrayed as one of indifference. Mr. Paul’s pilot, like Mr. Hawke’s in “Good Kill,” is the farthest thing from a blasé video-gamer eager to set off an explosion. At moments, he seems near tears.

Sharper, better made and better acted, “Eye in the Sky,” doesn’t present as overtly critical a view of drone warfare. The military officers take their work seriously and fret over every detail as they try to estimate the number of casualties for various scenarios.

The movie still makes very clear the contrast between military personnel who want to discharge their duties as efficiently as possible, and their more cautious overseers who calculate the chances that the attacks could spur a diplomatic crisis, or worse.

As in “Good Kill,” civilians keep intruding into the line of sight at the last second. Moments before the Nairobi attack is to begin, a spunky little girl (Aisha Takow) selling bread posts herself opposite the terrorists’ house, and nothing can be done until she leaves. A Somali undercover agent (Barkhad Abdi, from “Captain Phillips) is dispatched to buy up her loaves, but that assignment is interrupted.
An assistant of Colonel Powell is strongly pressured to estimate the chances of the girl’s being killed as less than 50 percent, in which case Colonel Powell can give the order to proceed. Another film might have found black comedy in the continuing “risk assessment” that accompanies each step of the operation. But “Eye in the Sky” allows the story’s absurdist elements to speak for themselves.

Mr. Rickman, musing in oracular tones, delivers the film’s despairing overview that pierces to the heart: “Never tell a soldier that he does not know the cost of war.”