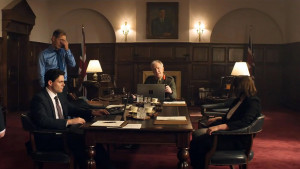 With the compelling and thrilling new drama Eye In The Sky, we finally have a drone movie worth cheering about. After last year’s rather lame Ethan Hawke attempt The Good Kill, which mixed a soap operatic subplot into a genuinely potentially interesting story on the human emotional toll taken on Las Vegas-based drone pilots, Oscar-winning South African director Gavin Hood (Tsotsi) and screenwriter Guy Hibbert have tacked the controversial subject head-on with a razor-sharp focus on one event that asks us to weigh the moral consequences of this new kind of modern warfare.

Defiantly not a war movie under the common definition of the genre, Eye in the Sky centers on a singular act and what its ramifications are in every term: political, moral, practical and, most of all, what it does to us simply as human beings who all inhabit the same planet. The plot, a rather simple one, centers on the quest of Col. Katherine Powell (Helen Mirren), a tough-as-nails British military officer whose command includes a covert (aren’t they all?) drone operation to snuff out a British citizen/terrorist on the run for six years in Kenya. That operation leads to the discovery of not only her target but also a suicide bombing mission about the take place at any moment.

This turns the op from a simple “capture” to an urgent order to “kill” with the use of the American drone surveillance. But just as it is about to be put into effect, a 9-year-old girl sets up shop selling loaves of bread right in the kill zone. Suddenly, with an innocent child in danger of becoming collateral damage, the drama is played out in board and command rooms across three continents — and for the Vegas-based drone pilot (Aaron Paul) with his first-ever “kill” order.

Rarely does a film so effectively and suspensefully spell out the price of war (really any war), and the strategic decisions that must be made in an instant. Do you take one innocent life to potentially save hundreds? That is the quandary at the center here, and I guarantee it will have you on the edge of your seat. Mirren, in a role originally written for a man, is simply superb, as is the late Alan Rickman as the general she reports to. Paul brings the real human element into focus as a young pilot with his hand on a trigger that could have grave consequences well beyond the push of a button. Oscar nominee Barkhad Abdi (Captain Phillips) is also excellent as a Nairobi spy who risks his own life in order to help target the enemy.

But it is Hood who brings this all together with the skill of a master craftsman, creating an almost Hitchcockian level of unending, nail-biting suspense in a picture that not only is enormously entertaining but also about as important and thought-provoking as they come. I saw it originally first thing in the morning just before its official opening at September’s Toronto Film Festival and immediately told any distributor I ran into that this was a film worth checking out. This is precisely the kind of movie adult audiences are craving, especially in the more barren spring months where typical Oscar contenders are not released. This should prove an exception to that rule.

Bleecker Street smartly bought the picture (from Entertainment One which co-produced the film iwth Raindog and handles several territories such as UK and Canada as well as International rights)  out of Toronto  for the U.S. and it looks like that decision will pay off as it has opened in L.A. and N.Y to encouraging early box office and great buzz. It will begin to widen more this weekend. Producers are Ged Doherty, Colin Firth and David Lancaster.