If You Want Nikolaj Coster-Waldau To Play A Good Guy, You’re Going To Have to Wait 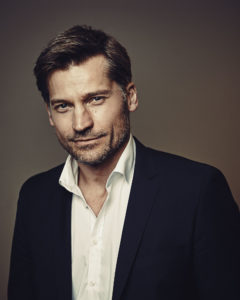 Nikolaj Coster-Waldau, Game of Thrones' guy with the golden touch, took a break from the show—and its massive production values—to shoot an original film for Netflix, which premiered this weekend. One GoT action scene might take two weeks to make, but on Small Crimes, that stint would have made up half the entire shooting schedule.

Coster-Waldau loved the "crazy energy" on set, though—on one particular day, they filmed a shoot-out, complete with explosions in the background—as well as the chance to do a deep dive into a possibly irredeemable character. Ex-cop Joe Denton might be caught up in a corruption and murder scheme, but his main crime might just be how thoughtless and selfish he can be.

The actor met up with ELLE.com over a burger and fries to chat about narcissism, the secrets of the universe, and why he's hoping his mother will forgive him.

When you start watching 'Small Crimes,' it seems as if it's going to be a redemption story. It doesn't turn out to be, but why do you think we expect certain characters—Joe in this film, Jaime in 'Game of Thrones'—to be redeemed in the first place?

We're brought up like that. We think, If you just keep going, it's going to be okay in the end. There will be a light at the end of the tunnel. We want our story to tell us it will all make sense. That works in this story's favor, because in the very beginning, you do think, Yeah, okay, this is good, he's just getting out of jail. One of the things he says in the first scene is, "I want to connect with my daughters. I want to be a father again." And we think, Of course! That's the only thing that matters. And then we're so invested in the character, it sneaks up on us—he's not really a very nice guy.

"HE DOESN'T THINK HE'S BEING BAD. BUT HE IS"
I mean, he doesn't mean to be bad. He doesn't think he's being bad. But he is, because it's all about his needs, and what he wants, and he has so many opportunities to not go down that path. We talked a lot about the frog and the scorpion, that whole thing, and it's just, "I can't help myself." People don't often change. Maybe, if you watch movies, you wouldn't think that it's rare. But I think life is more like it is in Small Crimes. At least if we fuck up in real life, we can watch a story where it works out, eventually.

Joe's own father diagnoses him as a narcissist. Do you think your character is a narcissist, or do we all have a tendency to play armchair psychiatrist and diagnose ourselves and other people?

Funny you say that, because I just read this thing, right now, where they found a connection between bacteria in your digestive system and your mental health. So obviously now, I take that little bit of information, and I put that on everything. Anyone who has mental issues? It's probably because they have too much gas.

Or they're not taking probiotics.

Exactly! "Sometimes, you just need to take probiotics. Have you done that?" Because I don't need to read the whole scientific study. That headline says it all. And that's what we do. I'm sure in 15 years' time, my kids are going to come and tell me why the way I brought them up is responsible for something they're going through, because we do that. "Oh, that? That's because of my mom..." or whatever it is.

Just wait until they start dating.

It's already happening. My wife said the other day, "I have a feeling that our oldest daughter has fallen in love with someone. We might be introduced to someone." So here we go! But it's a good thing. And it's a horrible thing. [Laughs]

But self-diagnosing, it's so easy, and that's why there's such an industry, and how it's growing. I don't know how many self-help books are in that category. I remember I was skimming this book, I read most of it, called Law of Attraction. Basically, it's in the vein of The Secret—you can have whatever you want, if you just ask for it. Ask the universe, and it will give it to you. If anything bad happens in the world, if something bad happens to anyone, it's their fault, because you attract whatever you send out. So if you do well, good for you. You have only yourself to blame for you doing well. But if you're fucking up in life, well, that's your fault. But the good thing is, just ask for something else, and you shall receive.

Part of it is just common sense. If you want to succeed at something, you have to focus. The danger, of course, is that you become so selfish. Everything is about your needs. All the people around you, you don't have to invest in them. You don't feel any responsibility towards them, which is scary.

And for Joe in Small Crimes, it's all about him. Whatever happens, it's about him. Even when it's about someone else, he makes it about him. You could argue that the whole story is about karma. You could argue that it's a happy ending, in a way. Without giving anything away, the father finally takes responsibility. What's he going to do with the money? "I'm going to give it to my girls. Most of it." But you know, it's like, [takes out his wallet and offers a bill] "Oh, I'm going to give you some money. Oh, shoot. I only have a twenty. I was going to give you a five, but I don't have it. Next time."

Speaking of parents and lessons about selfishness, congratulations on the piece you wrote for the 'New York Times'...

[Grins] I'm very, very proud. I'm kind of worried, too. I sent it to my mom and my sisters, and my sisters were really excited, but I haven't heard back from my mom yet. I think she hates the fact that I mentioned her. She's pretty private.

You didn't run it by her first?

No. But I thought it put her in a good light. I'm sure she's going to be fine. Do you ever run into that with people you write about? You know, some of my favorite things to read, which can also be really horrible on one level, but it's when you sense that the journalist really doesn't like the person they're writing about, that they think that person is an asshole. There's something about it that can be so entertaining, but you know, This is not going to end well. I read one recently with Miles Teller in Esquire, and it started off something like, "I'm trying to figure out if Miles Teller is a dick." It was so fun to read! It leaves a mess, but that's fine. You could start this one off as, "I'm trying to figure out if Nikolaj is a dick." It's okay if you start it like that! [Laughs]

It's okay. I don't think you're a dick. You don't need to worry about the dick.

This interview has been edited for clarity.