Jaime Lannister Makes His Kids Work, Just Like You 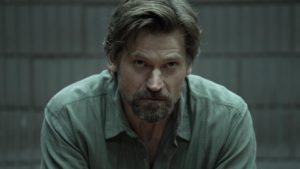 We caught up with actor Nikolaj Coster-Waldau to talk about his new film 'Small Crimes,' 'Game of Thrones,' and his daughter's two jobs.

The new Netflix film Small Crimes is not a redemption story. That much should be clear from the moment we're introduced to the film's protagonist, Joe Denton, played compellingly by Game of Thrones star Nikolaj Coster-Waldau. Streaming now, the film opens with Joe, an ex-cop serving a six-year prison sentence, making his last confession to his priest before being released. Joe tells the priest (and the viewer) everything we might want to hear: He's remorseful for his past, is committed to maintaining his sobriety, and eager to see his daughters who mean the world to him. As the words leave his mouth, the viewer both believes that Joe means what he says but also doubts that he'll make good on his promises. That suspicion is vindicated when Joe heads to a bar after he is freed and orders a shot of whiskey. He uses his AA sobriety chip as a coaster.

This quality in Joe—that he both wants to do the right thing but is at turns too selfish, manipulative, or incompetent to follow through—drives the action of the film, which leads Joe into increasingly complicated confrontations with a crooked cop, a dying mob boss with a sadistic son, and a district attorney with a vendetta.

Directed by Evan Katz (Cheap Thrills) and co-written with writer-actor-director Macon Blair (who also appears in the film as Scotty, the sole person who enthusiastically welcomes Joe home), Small Crimes bets heavily on Coster-Waldau's ability to make us care about Joe, despite his numerous shortcomings. The pressure on the Danish actor's performance is made more challenging by the removal of any backstory or flashbacks that might build sympathy or understand for Joe through explaining why he's done wrong. There is also, perhaps, the added pressure of the Game of Thrones "curse" that stars like Kit Harington have said makes it difficult to play roles outside the world of Westeros. But Coster-Waldau, through a deep understanding of the character and an adeptness with the dark humor of the script, manages a performance that might make you forget he's ever been a certain charismatic Kingslayer.

I recently met up with Nikolaj Coster-Waldau at the Nomad Hotel in New York and spoke with him about his own selfishness, why he makes his daughter work two jobs, and Jaime Lannister's internal battle to be his own man.

VICE: Small Crimes is funny in an unsettling way. How would you describe the humor in this film?

Nikolaj Coster-Waldau: I remember reading the script and thinking it was funny, but I thought that I should find out if the script was meant to be funny or was this just me? I spoke to Evan [Katz] and later on to Macon [Blair], and I got how they intended it to be read. It's a dark comedy and a drama, and that made sense to me. When I look at my own life and think about some of the most horrific moments in my own life, painful situations, I see also really funny things.

What does Joe Denton really want?

He doesn't know. He's been living for so long in a fight-or-flight mode, in a panic of not getting caught. He thinks: I just have to turn this one corner. I just have to get out of this bad situation, and then I'll be OK. Even though he's spent six years in prison, he's been bullshitting throughout those six years. He's always manipulating. He has an image of himself that he'd like the world to see. He'd like to be a considerate, recovering alcoholic. Someone who has seen the darkness and understands the darkness and has been fighting the darkness and is ready to move ahead and enter life as a good, law-abiding citizen. That's the great thing about the way Macon wrote the script. You start the movie, and he says the things he wants to hear: "It's all about my daughters. I just want to be a good father now." We think this is a story about a guy who has done a lot of bad things, and there will be some shit happening, but at the end he will finally be taught a life lesson we can all relate to and goodness will prevail. But what he wants is for people to love him, regardless of anything he does. He cares in the moment. It's like you might think: Today's the day I'm going to give a beggar some money. And then you open your wallet and see that, Oh, shit, I only have a 20. Never mind.

So is Joe an exaggerated version of who we all are?

I think we're a lot more selfish than we want to admit. We all see the world through our eyes and filter it accordingly, and Joe Denton is no different. My favorite line in the film comes when Joe's dad confronts him about what he's going to do with some money he has and Joe says, "I'm going to give it to my daughters… most of it." Nothing is unconditional.

You recently wrote a piece in the New York Times about your own selfishness, where you describe the moment you transitioned from the self-centeredness of youth into a more aware, mature person capable of putting your mother's feelings before your own. What made you want to write that piece?

I don't know. It was a very important moment in my life. The idea was that the headline would be "The First Time I…" and then could be whatever you wanted after that. When you're a parent yourself, you think more about how your parents raised you. I have teenagers now. You know how they say, "Teenagers go crazy," but it just occurred to me that it is as much parents as teenagers who go crazy. There's a pressure on me to be aware of what's going on because of alcohol, drugs, sex, all these things—which is in a way crazy, because I shouldn't interfere in her life. You can't.

"If [my daughter] wants money to go out with her friends, she'll have to work for it. And she's run into those moments when she wants to go out, but the money is gone, and that's annoying, but an important lesson."

That piece also touches on your desire to protect your children from self-obsession and excessive materialism. That's hard for any parent, but you have to do it while in the midst the global phenomenon of Game of Thrones.

Yeah, it is bizarre. I was in China and Kenya, and it was the same level of excitement as anywhere else in the world. I live back home in Denmark, and that does make a difference. I'm sure it would be different if I lived in LA. My kids have seen some of [my work], but they still think the idea of me pretending to be someone else is weird. And if they see me make out with someone, that's gross and really uncomfortable. And I get that. I'm their dad—I'm not supposed to be kissing another woman.

Growing up, my mom didn't have a lot. And now I have financial freedom. I could spoil the shit out of those kids. But obviously I don't do that because it would be so stupid. It's really important that they learn to manage that part of their life, and they are, of course. Being financially independent—I just mean being able to manage your finances—is really important, and it took me a long time as a grown up to learn that, and I want my kids to learn that. My oldest has two jobs, and she earns her own money. She works in a bakery and helps in a cafe. She's 16. If she wants money to go out with her friends, she'll have to work for it. And she's run into those moments when she wants to go out, but the money is gone, and that's annoying, but an important lesson.

As both Jamie Lannister and Joe Denton, you have the challenge as an actor of portraying characters the audience needs to feel connected to, despite the bad things they do.

I know what you mean, but Jaime Lannister is the opposite of Joe Denton. Jaime has values, he will follow through, and if you're his family or his sister, you can trust him unconditionally. He'll kill kids for you. His whole life is about his sister. These characters are both complicated. I don't know any people who aren't complicated. We all carry the potential for good and bad. I find it interesting to show people with flaws. With Jaime, everything is extreme—he's a knight, and we're in this other world—but there are a lot of people who see their whole purpose for living through the needs of their partner. People who will say: "I'll do whatever you want." You lose yourself in that, and then you have to fight to reclaim yourself, and that's what Jamie is battling with. Joe Denton is the opposite. Everything is all about him, and if you want to be a part of his life, you'll have to fit into his because you know he's not going to make an effort.

There's a tendency from the public to want to connect the character to the actor forever. Can you be unseen as Jaime Lannister?

I'm aware of this, of course. The first job I ever did was a movie in Denmark called Nightwatch, and I was very lucky, and it became a big, big hit in Denmark and because it was the first thing I'd been in. For a long time after, if I was in a play or something, they'd write, "Oh, the night watchman Nikolaj Coster-Waldau." And it upset me for a long time until I realized that's just how it is, and there's nothing you can do about it.