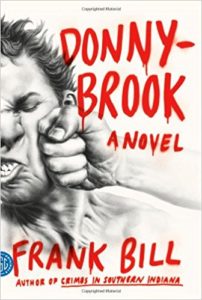 On top of financing the film, Backup Media is currently negotiating distribution deals for Germany, Switzerland, Benelux and Austria. Manuel Chiche’s banner The Jokers is co-producing the pic and will release it in France.

Sutton’s fourth feature after “Pavilion,” “Memphis” and “Dark Night,” “Donnybrook” turns on a cash-strapped family man who competes in the Donnybrook, “a legendary, bare-knuckle brawl where a $100,000 prize goes to the last man standing.” The producers describe the film as a mix of “No Country for Old Men” and “Fight Club.”

“Between Frank Bill’s primal scream of a book and the controlled menace of Tim Sutton’s ‘Dark Night,’ well…[it] feels like we might be raising some hell,” said Lancaster, whose credits include “Whiplash” and “Nightcrawler.”

Backup Media, which is led by David Atlan-Jackson, Jean-Baptiste Babin and Joel Thibout, said: “Tim Sutton’s subtle vision, along with the original novel and script, makes for a perfect match to continue our collaboration with Rumble Films.”

“Donnybrook” will start shooting in August in Southern Ohio.