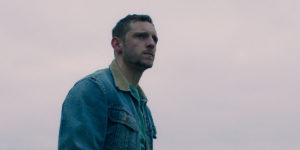 I walked into a pre-Toronto screening of Donnybrook unaware that Tim Sutton—director/writer of Pavilion (2012), Memphis (2013), and Dark Night (2016)—had written and directed this one too. “Haunting,” “ephemeral,” “lyrical” were adjectives I’d used when praising Sutton’s previous films, although I also remember Dark Night as etched with unspoken dread. Donnybrook, while speaking to the beauty of rural American landscapes as Sutton’s earlier work did, is a pulverizingly violent film. In the final scene, the central character explains to his daughter that the field in which they are standing was taken by the Union army in the Civil War. The daughter asks how the North did it, and her father says, “They fought for it. That’s what people like us do. We fight.” Adapted by Sutton from a nasty novel of the same name by Frank Bill, Donnybrook is set in Ohio’s backcountry, where making and dealing meth and homebrewed opioids is the one of only ways to survive. Another is cage fighting. Ohio may be Trump country, but the people in Donnybrook are beyond politics, not to mention voting, just as Kurtz in Apocalypse Now is beyond the military. Apocalypse Now came to mind as Jarhead Earl (Jamie Bell, astonishingly transformed) is ferried up the Ohio River to Donnybrook, where three dozen or so caged men go mano a mano until only one is left standing. But before that climactic scene, others are shot or tortured for twisted pleasure or profit. The film doesn’t exploit its characters or the audience. It simply shows what is—or given the way things are going—what soon could be. [I interviewed Sutton in advance of the world premiere of Donnybrook at Toronto.]

Like Dark Night, Donnybrook is about what in the Sixties we called the war at home and how, in part, people who go to war overseas bring the fight back with them.

War has always been here. It’s what the country was built on. David Lancaster, the film’s producer, offered me the book to adapt. With that came a bigger budget, a larger canvas. I’d never done an adaptation, but I found it natural because I’m from the country and I love crime fiction. My goal was to make it less a fight film and more a soulful film. I thought I could do it because Dark Night had the threat of violence and this film has the act of violence. I thought I could get these people from A to B in a realistic, soulful, emotional manner that has to do with the things I’ve been interested in for a long time: how people exist within a specific physical and emotional landscape. Where the movie comes from for me is a combination of early Malick, the end of Taxi Driver, and Apocalypse Now. I had Jamie Bell watch Apocalypse Now many times. Donnybrook is about a trip to the end of the world. It’s utter destruction.

Why did you cast Jamie Bell?

I remember watching him in Billy Elliot. And then after a long time I saw him again in a small role in the S&M scenes in Nymphomaniac. He’s a phenomenal actor. I felt like watching someone living in front of the camera. That’s what I’ve always done. Let people live in front of the camera. I say “action” and “cut” but what they do in between is up to them. We mold it and we shape it, but I never tell people exactly what to do. I say, here’s the scene, here’s the frame. The frame is obviously very important. But I care about the truth of the 45 seconds or the five minutes of the scene. Jamie was able to take that and go much further than the people I’d worked with in earlier films who were not actors.

But you must have choreographed the Donnybrook cage fighting scene and earlier action scenes.

Yes, of course. But take Frank and Margaret in the car together. [Frank Grillo plays a serial killer and Margaret Qualley plays his opiated-addled sister.] The only direction I gave is that she should sense that something bad is going to happen to her because she’s been through it before. But what happens between them—the violence and then the hug afterwards—is up to them. What I care about is creating a sense of intimacy between the actors. There is a script but I never think about bringing it to life. It’s a platform for the actors, to get them involved and help them express their ideas so that they can bring the film to life. But I never think of bringing the script to life.

It depends on what the actors need. But not much. I usually shoot four or five takes including the rehearsal take. And then I walk away. I don’t have the money to shoot more. But from Pavilion on, I’ve found that what you get early is most alive. I don’t do lots of coverage. I’m not trying to get something perfect. I’m trying to get something essential, and that’s more a gut feeling. 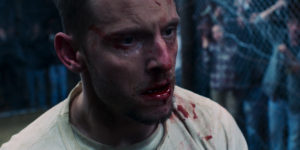 What did you shoot on?

An Alexa Mini with Arriflex lenses. We used three lenses. They were all wide. In the past I had much more depth of field and more of a painterly thing, but here I wanted the landscape to feel vast so when you get to the cage fight at the end, there’s no way out.

Who is the cinematographer?

David Ungaro. He’s French and he can do lots of different things—a Thai boxing movie, Mary Shelley. He actually taught me how to manage a set. He’s great.

I was so moved at the end to the film when Jarhead explains to his daughter that people like them have to fight for everything they need.

Yes, he may have gotten a piece of the Donnybrook prize money, but he’ll never get the whole pie. It’s always more loss than winning. I wanted to include “The Star-Spangled Banner” at the beginning of the Donnybrook fight scene, because when she sings “land of the free and the home of the brave,” you are looking at fighting in a cage. And that’s my observation about the state of things. It is a dark, angry, confused place out there that we only know part of. And I’m not making a judgment. I care for everyone in the film. But this is an angry, scary time in this country. And that’s why I wanted to show the Donnybrook. It’s out there, like Kurtz is out there in Apocalypse Now.

And is the Donnybrook real or is it allegorical?

Do Donnybrooks happen exactly like that? I did a lot of research on bareknuckle fighting. The closest to it I saw were these bareknuckle brawls in Russia. I didn’t find anything that was that big a brawl in the United States. But you accept giant Armageddon-like movies for 20 years, and then you’re shocked when someone blows up a building. And the UFC—the cage fighting on TV—is more popular than boxing, which I think is barbaric too. It’s a billion-dollar industry and some of it is cage fighting. We celebrate it on mainstream TV, just like football, which leaves all these people brain-dead. These are things that America celebrates and then we are aghast when that kind of violence leaks out into the real world.