Not everyone was up to the challenge of bringing director Tim Sutton’s brutal bare-knuckle brawl drama “Donnybrook” to the screen.

Like the everyman warriors of the near-mythic cage fight at its center, the film pulls no punches as it surveys a country locked in dog-eat-dog conflict, afflicted by vicious cycles of violence — physical, emotional, spiritual — and traumas that have never healed.

“I had one actor say after a few meetings that he wasn’t sure he wanted to do something that was so dark, and I was like, ‘Well — that’s the movie,’” said Sutton, whose bold fourth feature stars Jamie Bell, Frank Grillo, James Badge Dale and Margaret Qualley in a startling and riveting turn.

Opening the Toronto Film Festival’s Platform section Friday as a title available for acquisition, “Donnybrook” is at once a requiem for a certain segment of America, and a clarion call for all to take a hard inward look at how and why we’ve arrived at such a tumultuous time in the nation’s history.

“It feels quite dreamlike,” said the British-born Bell, who plays Jarhead Earl, a devoted father, husband and military veteran and the closest thing the film has to a hero. “Like a horrible Mark Twain nightmare set in a Trump America.”

Adapted from Frank Bill’s 2013 novel, the donnybrook of its title is a rural underground cage brawl with a $100,000 cash prize — enough money to pay off debts, flee the past and restart a life, a windfall worth putting one’s body, fists and blood on the line. 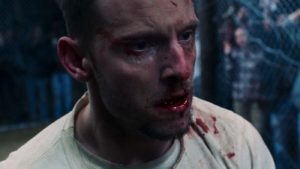 To Jarhead Earl, a good man struggling with dire financial straits and a wife who’s fighting her own losing battle with addiction, it’s the only way to move his family out of the trailer park and provide for them a safe, secure future.

But other more insidious forces stalk the road to the donnybrook, namely Chainsaw Angus (the menacing Grillo), a meth dealer whose twisted relationship with his younger sister Delia (Qualley) is in itself a complex tangle born of destructive cycles of violence, manipulation and abuse.

“I didn’t make this movie because I wanted to make a fight movie,” said Bell, who also stars as a reformed skinhead in another TIFF premiere title, “Skin,” based on a true story. “I really dislike fighting. I don’t find any kind of vanity in it. But it’s an integral part to this character .… He knows that’s what he’s good at. He’s come out of the military like, well, these are the skills that I have.

“And although I don’t agree with violence, there’s something about that — you defend your family with what you have,” said Bell, who recalls pounding a punching bag during filming so intensely that viewers will see his own bloody knuckleprints onscreen.

Previously known on the art-house circuit for his more experimental first three features (2012’s “Pavilion,” 2013’s “Memphis” and 2016’s “Dark Night,” inspired by the Aurora, Colo., movie theater massacre), Sutton adapted “Donnybrook” for the screen in his biggest feature to date, transplanting its setting from Indiana to the small-town saloons and trailer parks of rural Ohio.

In his hauntingly lyrical vision — an “opera of chaos” lensed by David Ungaro along the misty, verdant, and decaying landscape of economically depressed Middle America — violence abounds long before we get to the desolate remote farm that hosts the titular fight. Darkness, to say the least, was always a given.

“Dark Night” “was about the threat of violence, and about holding back from that,” said Sutton, who was tapped to adapt the project by “Whiplash” and “Nightcrawler” producer David Lancaster. “This was about the act of violence. And if I was going to talk about violence at this point, I had to go fully into it — I had to go to a place where it was as dark as it could be, where these people end up in an act of violence and I would show the whole thing, I wouldn’t hold back.”

Sutton felt flashes of recognition reading Bill’s novel, tracking the colliding fates of “Donnybrook”s desperate characters. He saw these people, these lives, these lost dreams in folks he knew from his own upbringing in New York state. Most of all, says the director, the story of “Donnybrook” is incontrovertibly a story of America.

“This is about the country. This is where we are right now,” said Sutton. “There is a huge population of people in the middle of the country who feel like they are dispossessed — some of whom have gone so far into a different place that they are kind of outside of the world that we live in.”

“I wanted it to be this horrible opera of destruction,” he said, “because I think we’re so close to that right now as a country.”

But if “Donnybrook” is aiming squarely at America — specifically poor and working-class white Americans, the only players represented in the deliberately limited perspective of Sutton’s dark fable — it also seeks to understand and engage with those who might see themselves reflected onscreen.

“I think historically we’ve been on a descent long before Donald Trump, but I do feel that the movie speaks about the times for what they are right now, and is a larger kind of folk tale about American violence and about American anger,” Sutton said.

The point is made as “Donnybrook’s” characters hurtle toward an ultimate violent reckoning, traversing a heartland of darkness. To get to the prizefight, combatants are ferried across the Ohio River — a scene Sutton and Bell envisioned à la Willard’s watery quest in “Apocalypse Now” — where the American flag hangs proudly for jeering spectators and men in cages stand in deference for a warbled rendition of “The Star-Spangled Banner.”

To underscore his point, Sutton set a key scene not originally in the book at the site of a historic Civil War battle where, Jarhead muses, “the South never recovered.”

“To me, this film has a lot to do with white rage. There’s a lot of anger, there’s a lot of confusion, there’s a lot of menace,” Sutton said. “And while Jarhead and his family are not part of that kind of reality, the point of the film is about how people are simply trying to survive — and how fighting isn’t the only way.”

To that end, the actors tapped to bring “Donnybrook” to life describe a creative openness on set that allowed deeper currents of humanity to surface in characters who are situated at various points along a sliding scale of morality and lawfulness.

For Grillo, who studied documentaries on the long-term effects of abuse and neglect on children to understand his character’s background, it was important to make Angus more than just a monster. “I didn’t want to make him a sociopath,” he said. “He was a guy who was more emotionless until he was triggered.” 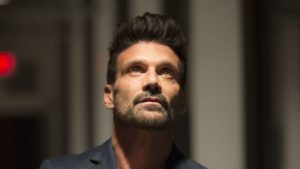 Some of his most intense and charged scenes with Qualley were improvised in the moment with the camera rolling, he said.

Qualley, who drew critical acclaim in last year’s “Novitiate,” approached Delia — a departure from the sister character of the original book — as a soul whose quest to reclaim her lost innocence is one of the film’s more bittersweet tragedies. It’s a courageous turn for any young actress that includes frank scenes of nudity and one of the most potentially divisive sex scenes in recent memory.

“What I want to do more than anything is to do things that scare me, that push me and make me uncomfortable and get me out of my comfort zone,” Qualley said. “Mostly I hope people see things in the right context.”

“We’re fortunate to be in a time right now when there are a lot of conversations about ways in which women have been victimized, and minorities have been victims of various forms of abuse,” she said. “I think there are so many different things to take away from the film, and in my favorite stories there’s not just one clear message that you walk away with.”

She and Bell are already planning to reteam with Sutton on the director’s next project, “The Chain,” adapted from a Tobias Wolfe short story “about people making bad decisions and paying for them,” according to Sutton.

That film similarly promises to continue the filmmaker’s exploration of what he terms “this lost American rage.” But as far as “Donnybrook” is concerned, Sutton emphasizes that his goal is a deeper understanding that doesn't take sides — and one that, hopefully, will reach open eyes, hearts and minds across the country.

“I think the film is artful enough that [it will] play in, let’s say, Missouri or Indiana or upstate New York and people see it and relate to it in a way they may not relate to a film about hipsters in Brooklyn,” he said. “I know it comes across as very dark and very brutal in certain ways, but the universal need to survive is in everyone.

“At its base, this is a movie about a family trying to survive — not making the right decisions, not having the right chances, not given all the opportunities, literally just clawing their way to the next day. And I think everyone can relate to that, whether at a world premiere or at a cineplex in the middle of nowhere.”